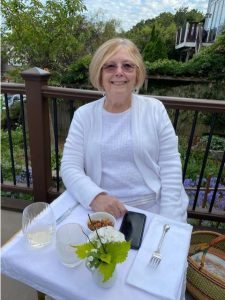 As part of our celebration of Women’s History Month, Seattle CityClub (SCC) is recognizing our long-time board member and outgoing 2020 board president, Kay Gabriel. For over 20 years, Kay served on our board and played a vital role as a leader and supporter of our mission around creating more access to elected officials and civic information. SCC is fortunate to have a true, “working” board and Kay rolled up her sleeves countless times over the years to serve our organization.

From her time as an environmental policy advisor at Weyerhauser to her key leadership role in forming SCC’s Washington State Debate Coalition, Kay had a wealth of information and wisdom to share and was twice-elected to serve as SCC’s board president.

In deep appreciation of Kay’s dedication to SCC and acknowledgement of her impressive career as a powerful leader, we hope you enjoy this interview where she shares her passion for civics and our democracy, as well as her memories of serving on the board and advice for future members.

Tell us about your career and how you joined the SCC board.

I started as an assistant director in the forest products program with the Washington State Department of Trade and Economic Development helping small manufactures find new ways doing business. Afterwards I worked for Senator Slade Gorton – a republican – as his deputy state director where I managed the state staff and served as a senior policy advisor on natural resources.

I have also worked for democrats including Booth Gardner because my focus has always been policy rather than politics. After working for Senator Gorton, I worked for Weyerhaeuser in government affairs and joined the SCC board as a representative of the company.

On reflection, how have civics and the conversations surrounding them evolved in the PNW?

I feel that our community is much more polarized now. When I started it seemed to be easier to recruit individuals who leaned to the right. Although many of the people I know who call themselves republicans don’t anymore.

Tell us about the formation of the Washington State Debate Coalition.

We spent two years creating the Washington State Debate Coalition mainly because some politicians stopped participating in debates or, if they did, it would be hosted in a pre-screened studio. We made the decision early on not to invite entities who endorsed candidates in order to stay absolutely neutral. In fact, we received several calls from other organizations wondering why they had not been included.

We started by receiving endorsements from every elected and retired leader from both sides of the aisle. Then we approached universities about being neutral places to host debates around the state. After those groups signed on, we approached companies to financially sponsor the debates but didn’t allow them to participate. Then, armed with all of that and asked media to join the coalition to host the debates we planned—so that only through CityClub would a statewide debate be hosted.

What do you believe SCC’s contributions to its community has been?

We work hard to make our public officials accessible to the average citizen so they can hold them accountable through direct, face-to-face interactions and to be able to asked direct questions unfiltered. I cannot think of another organization in the state that does that.

What are some of the highlights from your time on the SCC board?

I have loved my relationships and engagement with fellow board members. Everyone comes from different background and age groups but every one of them is committed to promoting civic dialogue.

There is a program that I particularly remember with fondness when Slade Gorton and Pramila Jayapal, when she was a new member of congress, were featured in an event. They couldn’t be more different in their polical perspectives. But afterwards, Pramila shared how much great advice she had received. It was a beautiful moment of bipartisanship and epitomizes what Seattle CityClub is all about.

What advice would you give incoming board members?

I would suggest to become active in at least on committee, attend all meetings, and don’t be afraid to ask questions!

Your ticket for the: Seattle CityClub Board Spotlight: Kay Gabriel