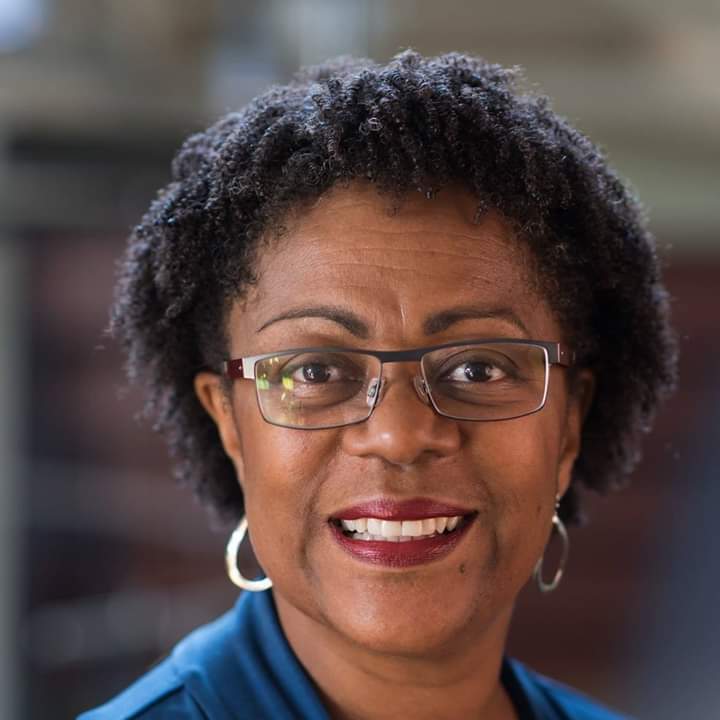 For as long as she can remember, Seattle CityClub Board Member Maria McDaniel has spoken out and asked questions.

Today, it helps keep CityClub open and inclusive to multiple perspectives, but McDaniel’s voice has not always been as appreciated as it is now. In grade and high school, McDaniel’s inquisitive nature once got her sent to the principal’s office for challenging the status quo.

“In first grade, we were studying Christopher Columbus,” McDaniel recalls. “[The teacher] said, ‘Christopher Columbus discovered America.’ And I said,’ Well, no, because there were Indians here. You can’t discover something if someone else is there.’”

McDaniel laughs about it now – “that was kind of like the first time I remember questioning something and getting in trouble” – but adds that the experience helped her realize that, while you need to be respectful, you do not have a duty to make others feel comfortable with your questions.

Born and raised in Seattle, McDaniel began her early activism with inspiration from her grandmother. Calling her a “guiding light” and “my heart,” McDaniel remembers her late grandmother for her compassion, wisdom, and sayings that include, “People are good, but sometimes bad things happen to them – so they do bad things to other people.”

Lessons like that, along with encouragement from her grandmother to “let your light shine” and “trust your gut,” would help McDaniel grow as an activist, as would the events she experienced growing up.

In the 1960s, McDaniel watched on television as the nation reacted – often violently – to the Civil Rights Movement. But after seeing members of Seattle’s Black Panther Party standing up for ordinary people, she felt inspired to get involved. 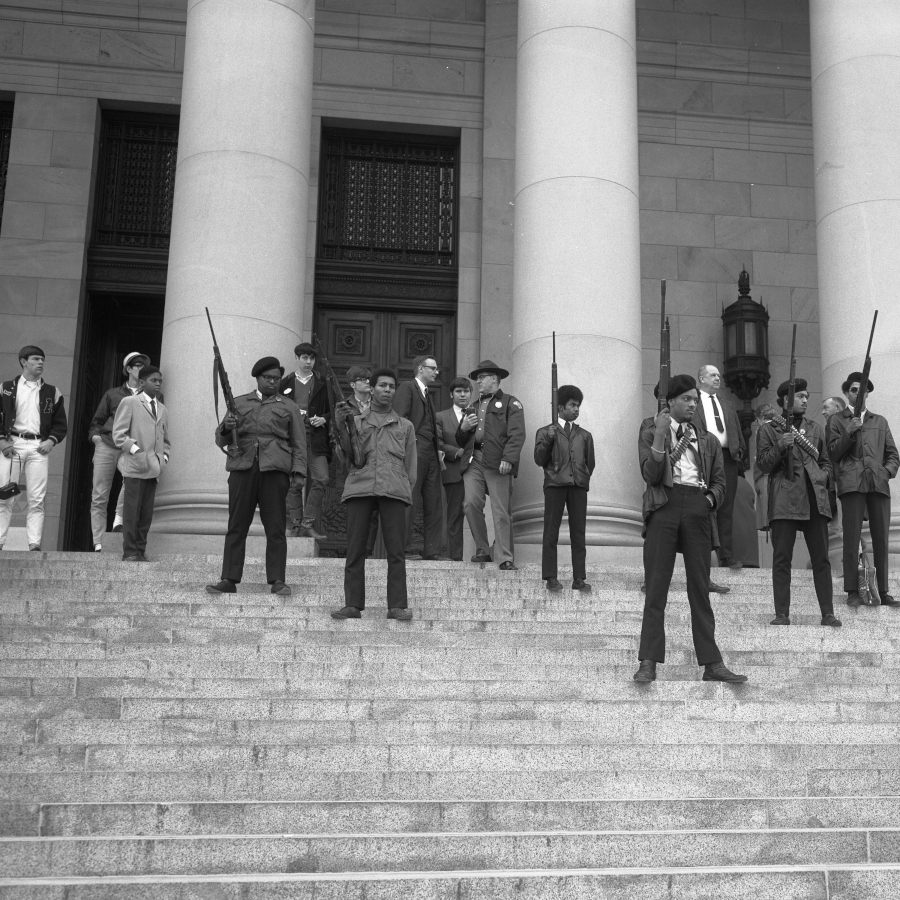 “I was used to seeing black folks being hosed, beat with batons, or chased by dogs on television,” she said. “I was always fearful. But then when I saw the Black Panthers in the neighborhoods marching, protecting people, breaking up this discourse between people and police, I felt a sense of empowerment.”

McDaniel realized she wanted to become someone strong enough to stand up for her rights, speak out, and protect herself and those in her community. She would do just that, and her journey would soon see her marching in Olympia to take a stand on South African apartheid, civil rights, women’s rights, and much more.

She was committed to making a difference. She still is.

“Meet people where they are”

In 2020, McDaniel is one of Seattle CityClub’s longest-tenured leaders. In 1998, she was a brand new CityClub volunteer who felt out of her element.

“Who are they?” she remembers thinking about her fellow volunteers. “What are they talking about? I felt really lost.”

McDaniel started volunteering at CityClub at the suggestion of a co-worker at Deloitte Seattle’s office. McDaniel had never heard of the civic nonprofit, but she took the advice and jumped in head-first with a Seattle CityClub Programs Committee meeting.

At first, McDaniel felt isolated and uncertain. She felt out of place at certain Seattle CityClub events, but she also saw tremendous organizational potential.

She kept researching. Kept asking questions. McDaniel felt there was substantial room for CityClub to grow, include diverse voices, and engage the broader public in civics. She continued participating, developed her civic knowledge, and committed to driving that change. She even invited friends and colleagues who were often not a part of the conversation to expand CityClub’s reach into the community. 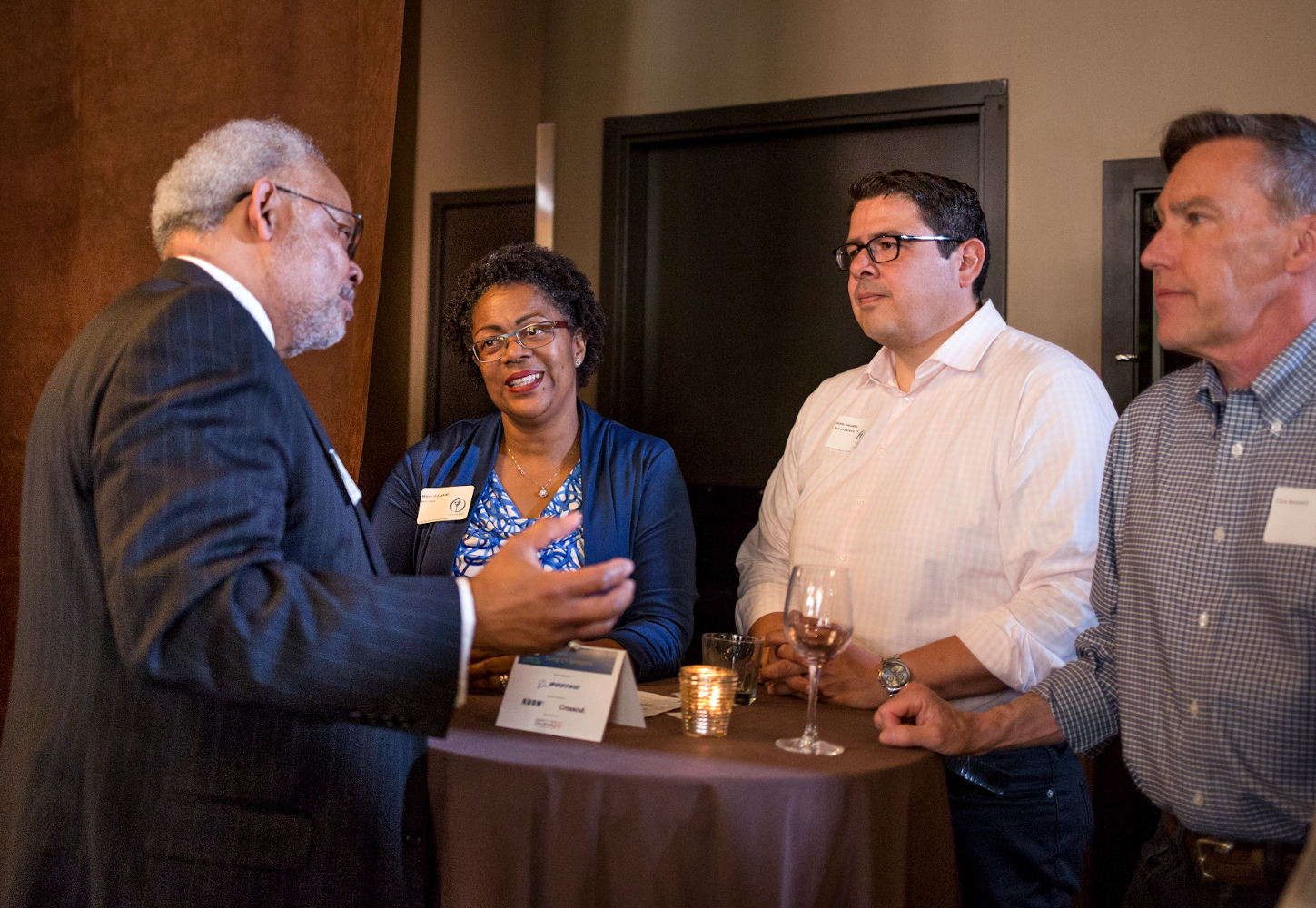 McDaniel, second from left, and others at Seattle CityClub’s Civic Cocktail in 2018.

In 2005, McDaniel was asked to bring her unique perspective to the Board. She grew into that role as well, volunteering on a variety of committees and finding her organizational archenemy: groupthink. Today, as the head of CityClub’s Outreach Committee focusing on diversity, equity, and inclusion (DEI) initiatives, McDaniel does not let the majority overwhelm quieter voices or dominate the discussion. She stays respectful, but she asks questions with no sense of duty to ensure that others feel comfortable with her questions.

McDaniel admits that she has heard comments in group settings that were “not okay.” But instead of responding with avoidance or disgust, McDaniel answers the most natural way she knows: with curiosity, by asking why someone would hold clashing or confusing ideas, and by trying to understand the context of others’ beliefs.

“We must meet people where they are to figure out how we can bring them in, in an inclusive nature, and then maybe move them along,” McDaniel says.

“I want to understand”

McDaniel’s go-to words for communicating with others on a fundamentally human level are, “Tell me more. I want to understand.”

And that, she says, is the most important takeaway from her story: To progress as a society, we need to bring everyone to the table – even those with controversial or hostile viewpoints – and have authentic conversations.

After all, people are good, but sometimes bad things happen to them – so they do bad things. When you pull apart the rhetoric, politics, and power plays, fostering inclusive environments and listening to others’ stories and ideas may be the only way we will ever move forward together.

Maria McDaniel has been a Seattle CityClub Board Member for over 12 years. She chairs CityClub’s Outreach Committee and has previously served on the Programs, Finance, and Hospitality committees, among others. She is also a Senior Business Analyst for the City of Seattle. To learn more about McDaniel, please visit her LinkedIn page.

Your ticket for the: Seattle CityClub Board Spotlight: Maria McDaniel