This past March, Seattle CityClub held two Civic Boot Camps where attendees learned about the history and some of the tenuous issues affecting one of Seattle’s fastest growing neighborhoods, South Lake Union.  Seattle CityClub staff member, Brianna Brown, recounts her experience as a Boot Camp attendee.

The sun reflected on Lake Union on a crisp March morning as I walked to the Museum of History and Industry (MOHAI) to attend my first Civic Boot Camp. I felt excited and lucky to be in the unique position to learn more about the area I call home by attending an event put on by the organization I recently joined. My partner and I moved to South Lake Union this past June and while I’ve done my fair share of exploring Seattle, before attending Civic Boot Camp I did not know a lot about the history of my own neighborhood.

The day started with an ice breaker in which each Boot Camper explained what community meant to them based on a card they selected with a picture taken somewhere in Seattle. I chose a card with an image of the Space Needle on it. I chose the Space Needle because I feel that communities should be inclusive, allowing everyone to enjoy their features such as the view from atop the Space Needle. It was also inspiring to hear from others who valued community attributes like accessible, affordable transit options, diverse communities, and means to connect with their neighbors.

Next we heard from Leonard Garfield, the Executive Director of MOHAI. Leonard briefed us on the history SLU from the time of the Duwamish tribe, native settlers and up until today. We learned how the area in a short period of time went from a poor, working industrial zone to Seattle’s epicenter of commerce and luxury urban living. I spend a lot of time thinking about gentrification and this segment drew my attention to some of the unintended, negative consequences that have resulted (at least in part) from the massive amount of economic growth SLU has experienced. Even though this growth has brought new jobs and opportunities to some, it has left many behind. Throughout the day, I found myself coming back to the theme of how to manage the economic benefits of growth in a way that disperses resources equitably to avoid displacing businesses and residents who have called the area home for decades.

After our morning session, we headed outside to see for ourselves the change that was just described by Leonard Garfield. Riding the South Lake Union Street Car, groups of us chatted about where we hailed from and the impetus for our attendance. Just a few blocks away from MOHAI, we started our walking tour lead by Brooke Best of Historic Seattle. Brooke is passionate about historic preservation and is determined to ensure the area’s roots are not forgotten or replaced by new developments. Her views on the need to preserve the Laundry, Seattle Times, and industry buildings in SLU were obvious as we walked around admiring the old buildings—relics of the past—many of which are now shadowed by several story, shiny new offices and apartments. 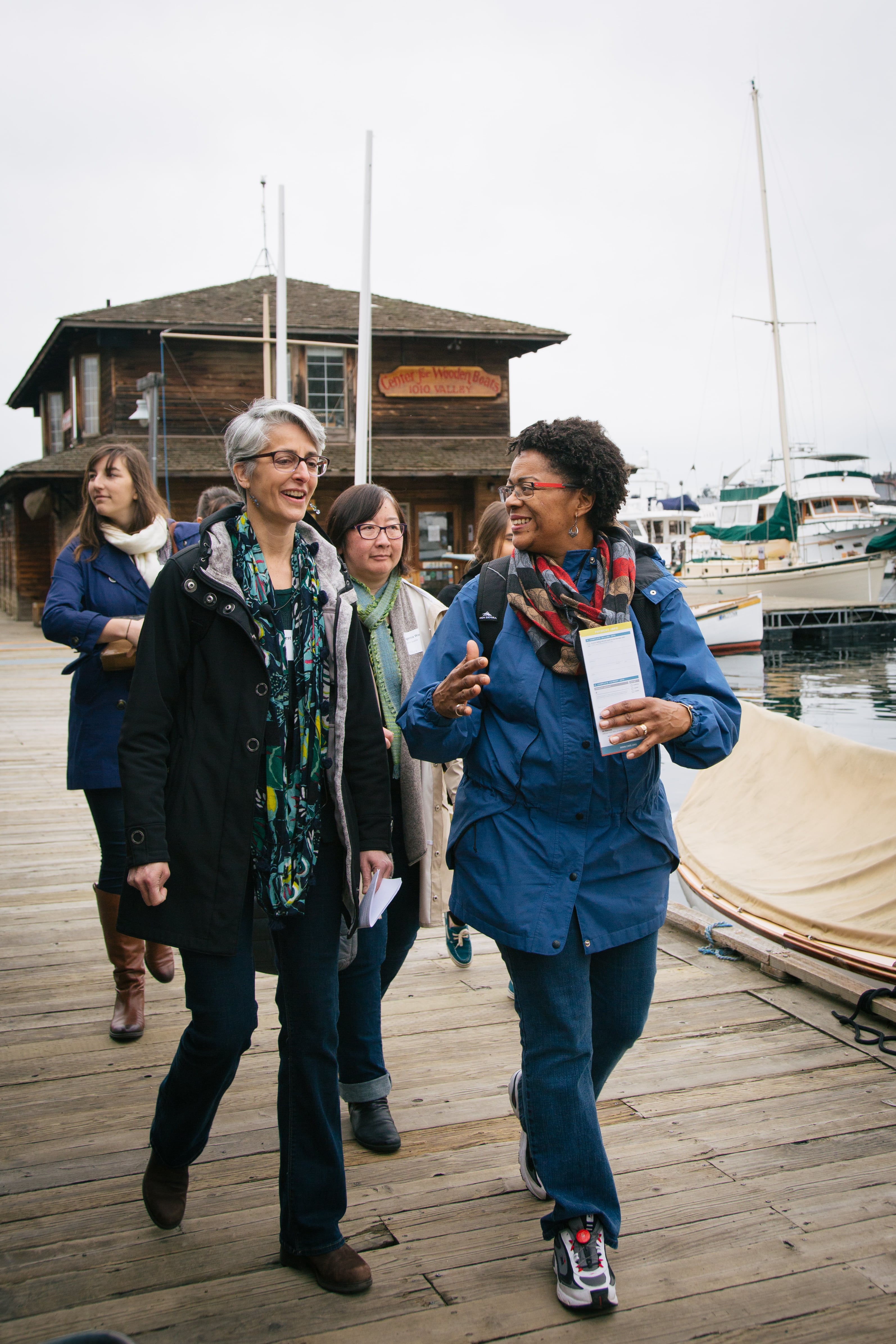 Mike McQuaid, a member of the South Lake Union Community Council (SLUCC), joined Brooke as a guide, providing the perspective of a community developer. He pointed out that the rapid economic development the area experienced over the last ten years was largely due in part to the building works that flourished, bringing value to the community. Hearing from Mike was a wake up call for me, I felt encouraged to become more involved within my local community council to make my voice heard about how I’d like my neighborhood to develop. The SLUCC aims to act in the interest of residents and businesses in the area, but in order to accurately and equitably represent, they require active participation from those who are affected by their decisions. Before this segment of the day, I was not aware of how much influence the community council has over what comes, what stays, and what goes in a neighborhood.

Seeking shelter from the rain (yes, the sun from earlier in the morning was short lived) and some lunch, we headed to the Immanuel Lutheran Church. Just blocks away from Amazon’s campus, the Church is another reminder of the heterogeneous distribution of wealth and opportunity in SLU. There is a large population of homeless individuals who rely on the community services that Immanuel provides. The Church opens their doors daily to provide meals, hygiene, and medical services, along with a  recovery program. While we nibbled on a delicious lunch from Nollie’s Cafe, a family business that’s been based in SLU for three generations, we discussed in our groups what makes a neighborhood livable, and whether or not SLU achieved that status. While my idea of what a livable city consisted of started to solidify, I still came away from the discussion with more questions than answers for how to achieve it. 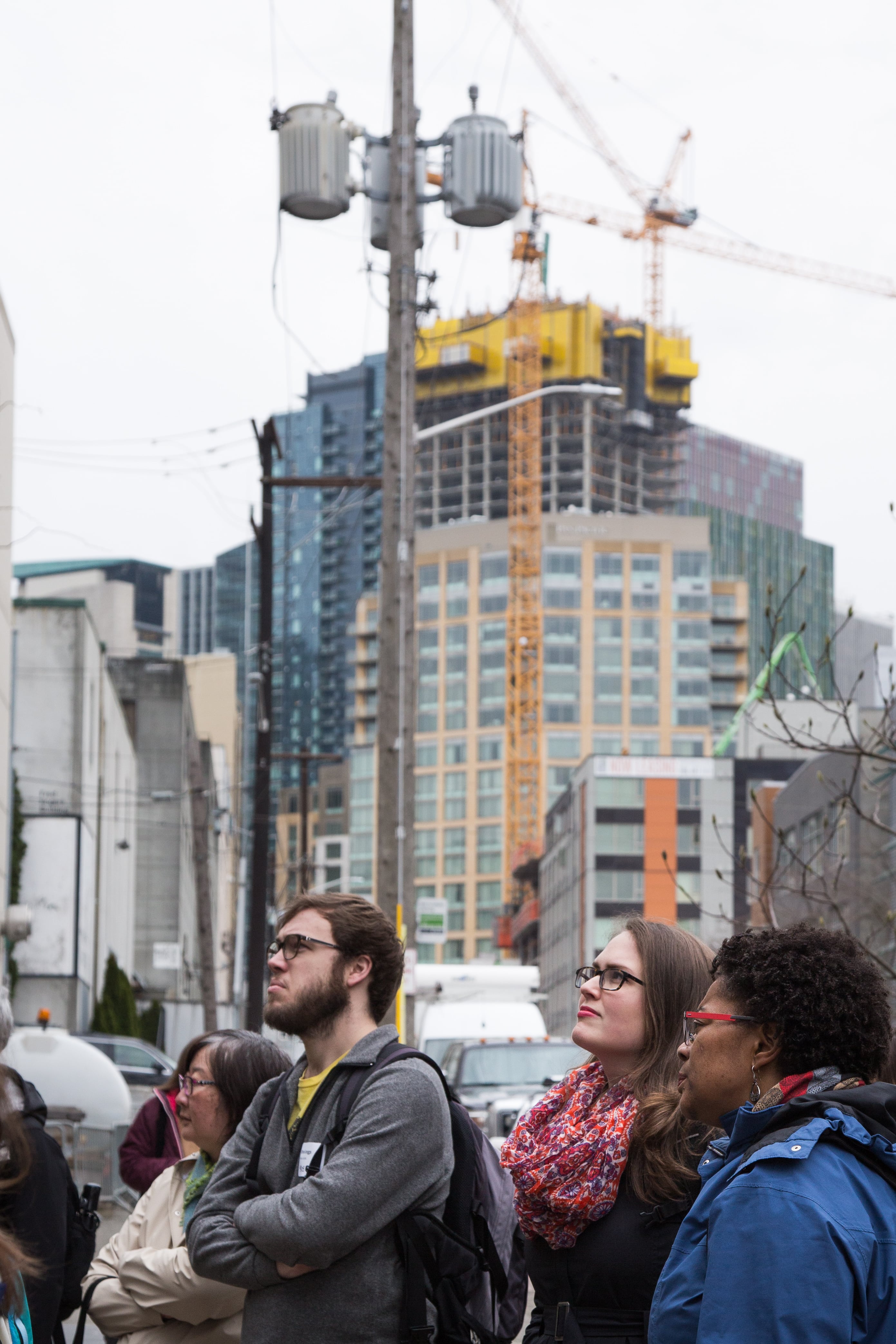 After lunch, we continued on our walking tour around the Cascade neighborhood. We were

shown examples of new apartment developments that had preserved aspects of their original construction while providing sleek urban living options. Walking past the apartment block where I live, I was pleased to learn about the efforts taken to preserve the original Laundry Factory Building and the highly esteemed LEED energy building rating my apartment block had been granted.

As the day drew to a close, we headed to Plymouth Housing Group, another vital support to the community by providing safe and supportive housing to homeless adults. In addition to hearing about the work of Plymouth, we participated in a workshop on how to make our voices heard in our local community. Sylvia Monreal, from Seattle Works, discussed serving on a nonprofit or public board to increase our impact in areas we’re passionate about. Kathy Sakahara, from the League of Women Voters, provided us with tools and tips for reaching out to elected officials. I really appreciated how both speakers provided us ways to participate no matter our capacity or time to do so. For instance, Sylvia explained that there is a sliding scale of participation levels depending on the type of board one joins. I often feel overwhelmed by the number of political initiatives I feel like I should advocate for or against, and it was helpful for Kathy to emphasise the importance of choosing one issue area/or piece of legislation to focus on when reaching out to elected officials. I came away feeling positive and also a little overwhelmed by the number of ways I’d like to get involved to start making waves in my own community.

Having read headlines about the massive change that South Lake Union has undergone, I was a little nervous to deepen my knowledge of where I live. However I came away from the day with a deeper understanding of the issues from various perspectives, providing me with a platform from which I feel empowered to be a player in shaping the area into a neighborhood I would like to be a part of. For me, getting more involved starts with getting to know my neighbors and involving myself in some of the organizations I was introduced to over the day. Like all Seattle CityClub events, Civic Boot Camp educates Seattleites on how to be informed influencers in their communities. While I don’t have all the answers to the tough questions around housing reform, city zoning laws, and equitable distribution of resources, I do feel—and I hope my fellow class of boot camp attendees would agree—ready to show up and be civically engaged within my community.

Your ticket for the: A Day at Civic Boot Camp: Livable Neighborhoods With Brianna Brown