Civic Cocktail – The Power of Politics: How to Win the Game and Get Things Done 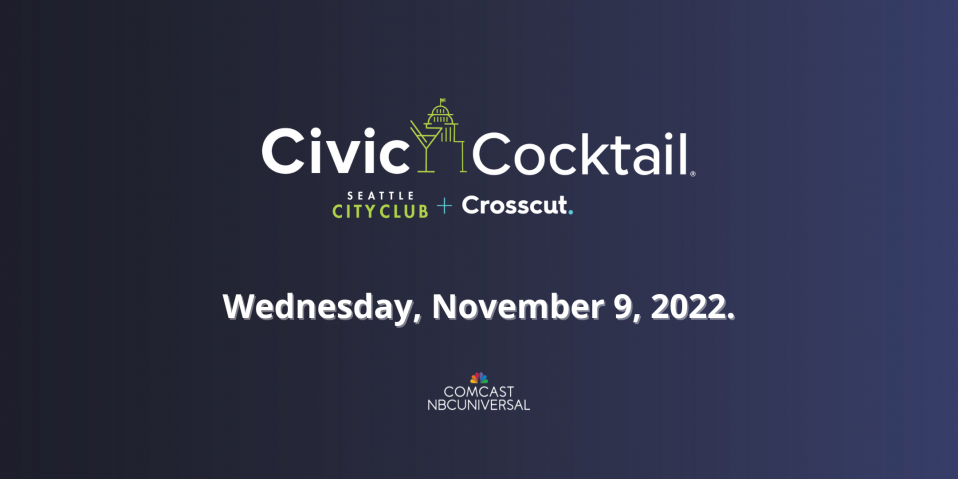 To win elections and get things done requires political maneuvering from inside and out of the seats of power. Just after a critical midterm election, leaders and political consultants from both sides of the aisle join Civic Cocktail to talk about how Democrats and Republicans play the political game and what it takes to win. Elected officials describe what it’s like to run a race and govern in these turbulent times – and how our democracy might survive (and thrive) despite our differences.

Civic Cocktail connects elected and community leaders with the public for lively conversations about important issues facing our region. Whether you’re new to the Pacific Northwest, a self-described “civic nerd,” or looking to meet people engaged in their communities, your evening at this beloved program is sure to be friendly, fun, and fascinating. Civic Cocktail’s welcoming and conversational tone is inspired by our Dialogue Across Differences initiative. We hope you can join in person, where the conversation happens over tasty bites and festive libations, but you can still enjoy the experience wherever you are by watching virtually.

Seattle CityClub is a 40-year-old nonpartisan, civics-focused nonprofit, providing a platform for insightful and educational conversations that include a diverse range of perspectives.

Crosscut.com is a nonprofit, publicly supported newsroom. It is part of Cascade Public Media, which also owns and operates KCTS 9, Seattle’s PBS station. Cascade Public Media serves the Pacific Northwest and its mission is to inspire a smarter world by committing to exceptional public television programming and local public interest journalism.

We will adhere to our venue’s current policies on Covid-19. Please check reminder emails for the latest updated requirements before attending in person .

Register for Event: Civic Cocktail – The Power of Politics: How to Win the Game and Get Things Done

Make sure to copy Registration number after successful submission.

Thank you for payment.

Your ticket for the: Civic Cocktail – The Power of Politics: How to Win the Game and Get Things Done

Civic Cocktail – The Power of Politics: How to Win the Game and Get Things Done